FIGURE 6
Atlantic salmon cave painting found in a shelter along the Vézère River in France.

HISTORY OF THE FISHERY 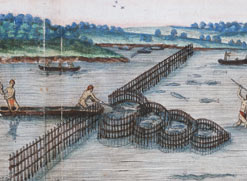 FIGURE 7 Native American weir catching salmon.
The atlantic salmon fishery goes as far back as 20,000 BCE, where a cave drawing in France depicts a man holding an atlantic salmon (12). At one point, salmon were so common they were used as pig feed in Europe (16). Atlantic salmon were fished by various groups over thousands of years, including the Romans and Native Americans (12). By the 12th century, salmon was a common food source in Scotland, which was made £200,000 from salmon exports annually by 1669 (16). England exported 170 tons of atlantic salmon each year in the Dee and Don rivers alone (16).  The trade for salmon grew even more in when England and Scotland merged in 1707 (16). With its popularity in Europe, the Atlantic salmon very well could have become endangered (16). Luckily, European rulers saw that it was important to protect atlantic salmon, and enforced regulations on the fishery (16). In the 11th century, several kings forbade catching atlantic salmon during their breeding season, and Richard the Lionheart demanded that all rivers would have a free flowing area the length of a three year-old pig as a migratory channel for salmon and other anadromous fish (16). The Magna Carta of 1215 stated that “All fish-weirs shall be removed from the Thames, the Medway, and throughout the whole of England," which lead to an almost immediate rebound of salmon in England (12). Atlantic salmon populations seemed to be in good condition and were managed well, but this all changed with the discovery of atlantic salmon in North America in the 1600s (17).

Native Americans had been fishing salmon long before the Europeans arrived, but fished sustainably (17). European arrivals brought an abundance of fishermen but no regulations, resulting in large numbers of salmon caught each year (17). By the 1800s, fishing in North America was very successful, with around 7,320 salmon caught in 230 weirs in 1867, and 10,000 salmon with 36 gillnets in 1880 (17). Weirs are large nets that span across a river, with an opening leading to a large fenced-off portion (18). Once in the fenced-off area, the fish are trapped and easily caught (18). Origins of fishing weirs can be traced back to Europe, Asia, and North America (18). Gillnets are walls of net that catch salmon when their gills get stuck in the net (2). Unlike weirs, gillnets are used to catch salmon at sea (2).

After peaking in 1889 with 17,000 atlantic salmon caught, the populations of atlantic salmon fishery in North America declined steadily, with just 40 reported catches in 1947 (17). Atlantic salmon had also disappeared in the Connecticut (CT), Androscoggin (NH and ME), and Merrimack (MA) rivers, which all held some of the biggest populations in North America (19). Lacking regulations, the fishery became overexploited (19). Pollution and dams also contributed to the decline (19). Immediately, the US government closed all federal atlantic salmon fisheries in 1948, and later imposed a moratorium on all US atlantic salmon fisheries in 1989, closing the recreational fishery save for a few in Maine (11). It is unclear whether Native American fisheries were closed down or ever even existed. In the 1980s, Canada followed suit, closing their provincial and federal fisheries (19, 20). However, Canada kept their recreational fishery and those of First Nations open (19, 20).

Many atlantic salmon spawn in North America, but they spend a large portion of their life in the North Atlantic, where they were not protected by US regulations (11). In response, the US and Canada joined other nations of the Atlantic to form the Convention for the Conservation of Salmon in the North Atlantic Ocean (CCSNAO) to come up with solutions to reduce mortality (21). This convention included the EU, Iceland, Greenland, Canada, and the US (21). The convention aimed to help manage salmon stocks throughout the atlantic using regulations and restoration (21). The result was the creation of a sanctuary for atlantic salmon in the North Atlantic, owned by nobody (21). In this region of the ocean, it is prohibited to fish for salmon as a target species (21). The convention also formed the North Atlantic Salmon Conservation Association, or NASCO to patrol this area and to deal with the management of the global atlantic salmon population (11). NASCO is a partner of the International Council for the Exploration of the Sea (ICES), who provides NASCO with data (11). In 1988, the US and NASCO implemented the Atlantic Salmon Fishery Management Plan (ASFMP), created to complement other management plan, and gave the US authority over all atlantic salmon of US origin, not matter where they migrate to (17). The ASFMP also made it illegal to posses atlantic salmon, calling for the immediate release of atlantic salmon caught as bycatch and caught recreationally (17). NASCO’s main concern was the interceptory fishery in Greenland, who harvested large numbers of atlantic salmon (12). In 2003, NASCO and ICES were able to convince Greenland to stop harvesting salmon commercially, but allowed Greenland to harvest salmon for internal consumption (12). Today their remains another interceptory fishery that NASCO are dealing with such as the French islands of St-Pierre et Miquelon (12). These islands harvested over 3 tons of atlantic salmon in 2011 (12). NASCO also created the International Atlantic Salmon Research Board (IASRB) to identify the factors causing high salmon mortality in the open ocean (21). the IASRB found that food scarcity, global warming, and salmon caught as a non-target species were to blame (21).

Around the North Atlantic, most of the atlantic salmon fisheries were shut down in the 1900s (11). However, there was still a strong desire for the protein-rich fish (11). To meet the growing demand, mariculture was introduced (19). The salmon farms and hatcheries can be traced back to the Danish in the 1890s, but it wasn’t until the 1960s did the Norwegians truly master the system (19). In Norway, a type of open mariculture called ocean net pens was created to harvest salmon (19). Ocean pens are areas surrounded by large nets with salmon inside usually placed in areas with currents, allowing ocean water to flow freely in and out (19). The brood stock is raised in separate onshore tanks and introduced to the pens once becoming parr (19). This requires minimal effort on the part of the fishermen and is cheaper than catching wild salmon because the ocean currents bring in most of the salmon’s food and carry away waste (19). By 1980, Norway had 173 farms producing over 4,000 tons (19). Other countries soon caught on, and similar farms were opened in the US, Canada, and even Chile (12, 19). Salmon ranching is a much more open system, where smolt are released into rivers and streams and are harvested when they return as spawning adults (19). This method was very popular in Sweden, but a new method has grabbed the attention of the mariculture world:  Closed mariculture (19). Closed mariculture facilities operate solely on land in tanks (19). Along with closed mariculture has come genetic engineering technologies (11).

Aquabounty, one company tackling genetic engineering of salmon, has combined the DNA of the atlantic salmon, chinook salmon, and ocean pout to create a fish that grows faster in warm waters (23). However, these techniques are not without concern (11). These fish could potentially be unsafe to eat, and the possibility of genetically engineered salmon breaking out into wild populations is a major concern (11, 23). Fish farms now have to adhere to over 20 different regulations, all aimed at ensuring that all mariculture operations meet environmental, fish health, and human food health standards (11). Despite these regulations and potential problems with farm-raised fish, the mariculture of atlantic salmon has taken off (2). Chile and Canada are among the major producers of Atlantic salmon globally, dwarfing the salmon farms of the US (19). However, the US is the largest consumer of farmed atlantic salmon, guzzling 170,000 tons annually (19). In 1989, 5% of the fish eaten in the US was atlantic salmon (19). Now, that percent has almost tripled to 14% (19). Surprisingly, many farming operations in the US are along the Pacific (19). Eager fishermen were intrigued by the atlantic salmon’s high tolerance to varying abiotic factors, and were able to convince the US government to permit the farming of atlantic salmon in the Pacific (this excludes salmon ranching) (19).

Only 16% of the rivers in New England that historically held salmon currently hold populations (19). This sudden decline has been blamed on 44 different problems, including overfishing and dams blocking spawning salmon (12). Between 1960 and 2000, the amount of salmon returning to spawn in North America dropped from 2.5-5 million to 400,000 (22). With this information, along with lawsuits involving the Atlantic Salmon Federation (ASF), all populations of atlantic salmon in the US were put under the Endangered Species Act in 2009 (11). After 15 years of raising $69 million, the ASF, Federal Government, and NOAA were able to remove 2 dams on the Penobscot River that were blocking the paths of atlantic salmon, which holds 70% of the US population (12). Despite all of these efforts of conservation over the last couple decades, the atlantics salmon population continues to drop in both North America and Europe (23). The open fisheries in Canada are not helping either, with 7,162 large salmon taken by First Nations in 2014 along with 1,343 taken through the recreational fishery in Quebec (no other province allows the kill of SW2 salmon) (12). It is most likely that the North American population has fallen under its critical number, with less than 100 individuals returning to spawn in the US in 2004 (11).

Restocking rivers with salmon fry is one way of increasing population (22). In the US, the Craig Brook Hatchery is the most important hatchery for atlantic salmon (22). Originally established for recreational fishery purposes in the 1800s, this hatchery is now dedicated to restoration (22). From 1992 to 1996, over 5,000 fry were released into rivers in Maine to augment populations (22). Unfortunately, the atlantic salmon population in the US continues to decline, and it seems that more radical reforms and policies will need to be taken to save the species (11, 12, 21). 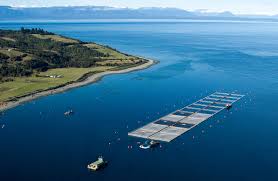 FIGURE 8
Open mariculture salmon operation off the coast of Chile.