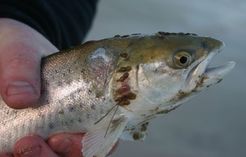 FIGURE 9 Young atlantic salmon infested with sea lice.
Atlantic salmon, like all creatures, are limited by natural biotic and abiotic factors, and also new threats created by human development and fishing (2). Salmon face predation from other species. As the atlantic salmon develops and migrates, its predators change. Atlantic salmon eggs are preyed on by eel, kingfisher, and mink. Trout, gull and otter prey on the salmon when it is alevin. When the fish is a parr its predators are suckerfish, merganser, and humans. Smolt, the penultimate stage of the atlantic salmon, are preyed on by perch, loon, pike, bear, heron, cormorant, and bittern. In the final phase of the fishes development, adult, the fish is threatened by hark, tern, seal, cod, gull, heron,  cormorant, swordfish, lamprey, and bears. (2)

There are also diseases and parasites that threaten the fish such as the Infectious Salmon Anaemia (ISA). ISA is caused by infectious salmon anaemia virus (ISAV) and causes hemorrhages and the failure of the salmon’s internal organs, leading to its death (24, 8).  ISA was first discovered in Norway 1984, soon after it was discovered it spread to Scotland, eastern Canada and the USA (24). In 2007 an outbreak of this disease killed 70% of Chilean farmed salmon (2, 24). So far, ISA has only been found in farmed salmon, which suggests that the disease has only been as deadly as it is because of the numerous salmon in a small space (24). Especially while at sea, atlantic salmon are preyed upon by sea lice (8). Sea lice are naturally occurring parasites that also prey on related fishes like trout (8). Sea lice are not a huge problem for wild salmon, but when many smolt congregate in estuaries, the parasite spread quickly with disastrous results (8). For this same reason, Sea lice can easily wipe out salmon populations in ocean pens. The main two types of sea lice that infest salmon are Lepeophtheirus salmonis and Caligus elongatus (8).

Dams are another major threat to atlantic salmon, especially in the US (2, 23, 25). Salmon inhabit rivers early in their life cycle and swim downstream to the ocean as smolt, and later return to spawn as adults (25). Dams hinder salmon movement, and if salmon cannot return to their birthplace upstream, they cannot spawn (23). Swimming downstream, a common fate of salmon is being chopped to pieces in the dam’s turbines (25). Even if salmon can get passed dams, it takes longer to travel from the ocean to the spawning areas, exposing salmon to predation for longer amounts of time (25). Not only do dams act as barriers to migrating salmon, but they create numerous other issues like higher water temperatures, stagnant water, availability and quality of food, and competition (25).

Salmon prefer cool waters; however, they can tolerate water temperatures as high as 78ºF (2). In turn, global warming harms the fish significantly (2). Also, raised water temperatures in rivers and streams favor other species that compete with salmon for resources such as bass (2). Recently, scientists realized that logging and the development of riverbanks have had a negative effect on atlantic salmon (26). Trees along the riverbed provided shade, and kept waters cool and hospitable for salmon (26). Leaves and fallen logs also provide hiding places for alevin and fry, and roots also helped to stabilize the riverbanks and prevent sedimentation (26). Added sediments make rivers and streams shallower, which decreases water temperature (26). Livestock allowed to graze along rivers and streams further destabilize stream banks, and also pollute water with their waste (26). Irrigation pumps placed in rivers have been known to suck up fry and alevin, but it is not known how many salmon die this way (26). Runoff of human activities such as farming and mining operations carry fertilizers and pollutants, further threatening atlantic salmon and their habitat (26).

Unfortunately, rivers are not the only place where salmon are faced with threats. Salmon inhabit estuaries and areas of brackish waters to complete the smoltification process before heading out to sea, and also as a final place to stock up on food before returning to spawn. These areas can be heavily polluted and developed, which further disrupts migratory patterns of salmon, and can even kill them. In some places, entire areas have been destroyed and filled in to make room for stores. (26)

Historically, Atlantic salmon have been overfished using weirs and gillnets, and US catches dropped significantly before the complete closing of all commercial fisheries in 1989. The atlantic salmon falls victim to bycatch, that is when fishermen catch the wrong fish by accident and by the time they realize what they have done, the fish is already dead. Atlantic salmon are caught both on the high seas and when the fish is traveling up stream. These fisheries target adult atlantic salmon, this prevents the fish from spawning, which is detrimental to the development of the stock. Fish farming is also harmful to this fish, because it gives an opportunity for the fish to spread sea lice, and other disease. That disease may spread to the wild if farmed fish escape. At the same time aquaculture is polluting the water and making the species less fit for the wild because they are interbreeding. (8)